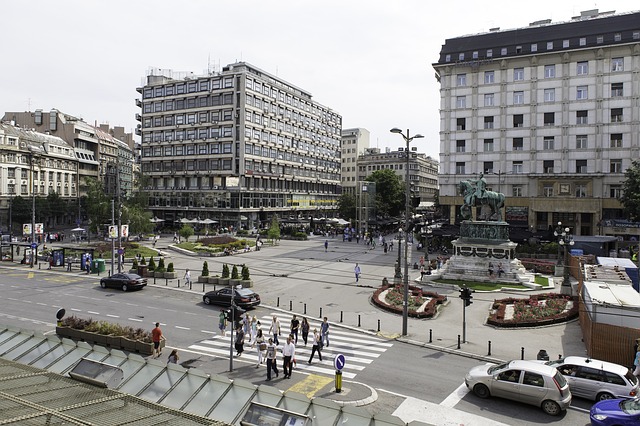 The walking tour portrays the most contradictory era of Serbia covering the period from World War II to 2000-s. You will learn about the towering figure of Josip Broz Tito, conspiracy theories and urban legends of Communistic Yugoslavia.

The tour departs at 12:00 from the Republic Square, most central meeting place of Belgrade. The guide will be waiting for you near the Big Clock and upon gathering will start the introduction to 50 years historical period of no more existing Yugoslavia. Republic Square hosts numerous monuments from the era of Yugoslavian Kingdom mixed with socialistic grey edifices of the constructivism era. Enjoy this contrast when walking to Nikola Pašić Square devoted to Serbian politician of the World War I time. Learn about the transition from Kingdom to the Socialistic Republic and see impressing building of the Serbian Parliament that gathered politicians from different epochs and, finally in 2000, was the place where Bulldozer Revolution started and contradictory figure of Slobodan Milošević was overthrown.

On your way you will see City Parliament and President’t residency that is located next to the monument of Ivo Andrić, Serbian writer and Nobel Prize winner. You will go down to via Prince Miloš Street to the magnificent Government Building and see the tragic image – the ruins of Serbian General Staff Building that was one of the first buildings bombed by NATO in 1999. The guide will raise the topic of the bombing and will give you another perspective and opinion about these terrible happenings.

Afterwards you will catch public transport, a comfortable trolley as a remaining from communist epoch, that will bring you to elite district of Belgrade called Dedinje. This area is famous for numerous embassies and residential villas with a great view over a part of Belgrade. You will proceed to the Yugoslav History Museum Complex, devoted to life and deeds of the famous communist leader, Josip Broz Tito. This man led the country to the bright future, and his times are nowadays remembered with some nostalgia. In the Museum you will see an interesting collection of ceremonial presents that were given to Yugoslavian President and will also visit his Mausoleum known as the House of Flowers. All the Entrance fees and round-way trolley ride are included in price.